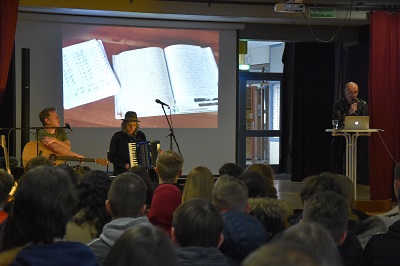 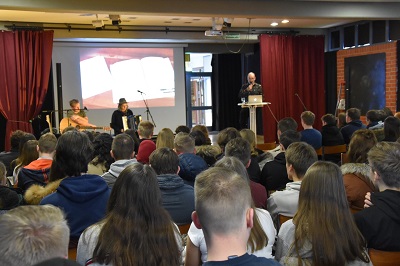 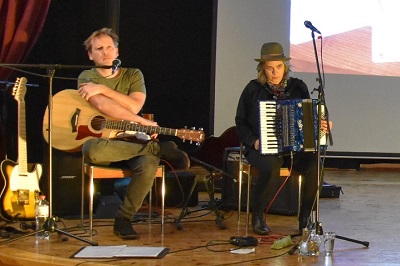 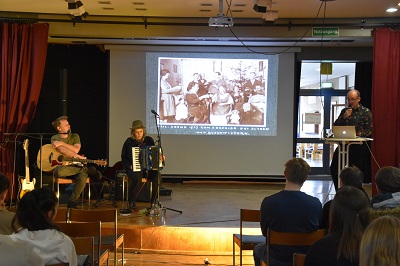 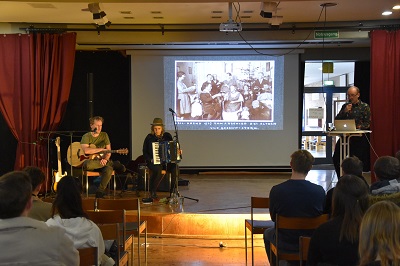 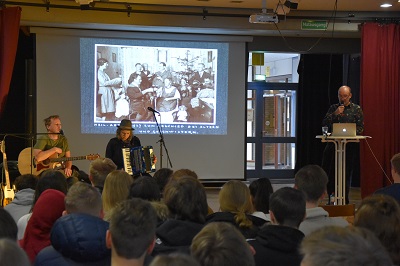 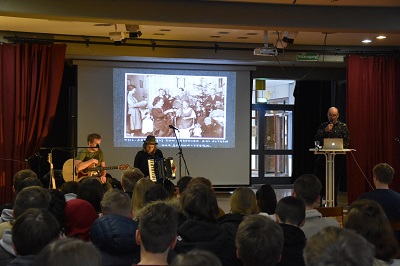 Review of the school concert “An evening in New York”

In 2018 the book “New York – Past and Present, 1928 till now” by the author Ulrich Balß was published by Jaro Medien GmbH. It was used as a foundation for the multi-media-show “An evening in New York” which was based on diary entries of Balß’ grandfather, Theodor Trampler, who emigrated to New York in the 1920s.

My schoolmates and I watched the show at our school, the BBZ Moelln. The audience consisted of pupils from grade 12, the English advanced courses of grade 11 and a class of “Kaufmännische Assistenten”. Nearly the whole show was presented in English.

The performing artists were the author himself (Ulrich Balß) as well as the musicians Rachelle Garniez and Thorsten Jüttner.

In this multi-media-show songs, photos and historical diary entries were combined into one. The author read diary entries of his grandfather, Theodor Trampler, who died in 1975, and added background information. The musicians accompanied the performance with songs played by guitar, accordion, harmonica and kazoo. Outstanding, however, was the gifted singer Rachelle Garniez who showed self-composed songs based on elements of retro jazz and Irish music. Some of the songs played by her were the Zeppelin-Song “Luftschiffbau”, the known song “Bei mir bist du sheyn” and “Walking Stick”. The audience further learned that Ulrich Balß went to NYC in 2016 to try to take the same photos as the ones his grandfather had taken in 1928/29. He then showed the results, comparing the past and present images.

The focus of the presentation seemed to have been put on the diary-entries:

In 1928 Theodor Trampler emigrated to the United States to find work because at that time there was no unemployment benefit or other financial support in Germany and he had to look after his wife and two children. A German friend invited him to work in NYC as a bookbinder, so Mr. Trampler decided to leave Germany and live in Manhattan sharing a flat with his friend´s family. There he wrote letters nearly every day – 6 days a week – each of which was 8 to 10 pages in length. After the 15 months he spent in the US, he had written a total of 114 letters. Ulrich Balß’ grandfather worked six days a week at that time and earned a salary three times higher than in Germany. This enabled him to send his family $ 40 each month. In his spare time he cycled around New York and took photos, covering approximately 2,000 km. He managed to sell some of his pictures to German newspapers which provided an extra income for his family. Mr. Trampler also illegally took pictures of the Woolworth Tower, the tallest building in NYC back then at 241 meters. After 15 months he returned to Germany because his family could not come to NY.

The multi-media show gave an interesting insight into past and present NY from the perspective of a German immigrant in the 1920s and from today’s perspective.

The music fit the story and that time (1920s). It was well performed, although it wasn’t the type of music people our age would normally listen to.

All in all, it was an interesting insight into life in NY in the 1920s and the experience of a German immigrant in the USA. For us as pupils it was definitely a nice alternative to otherwise normal school lessons and since we know that the USA will be a topic in grade 12, we now have background information that we can refer to later in our studies. 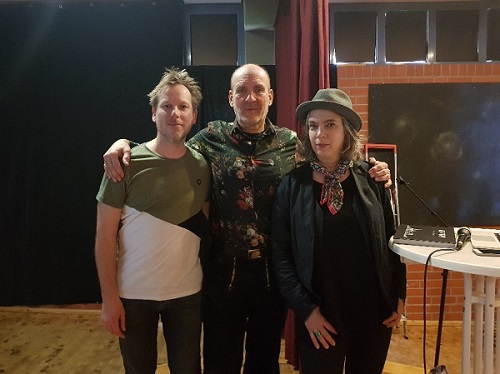 Written by a student of the advanced English course, grade 11